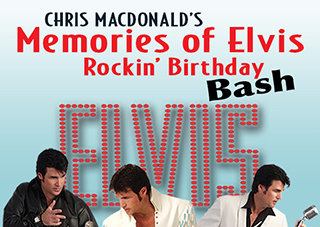 This January 8th would have been the King’s 86th Birthday. Gone but never forgotten, his image, music, films and memories live on as a testament to his true effect and influence on his generation and future generations to come. Keeping the memory alive at countless venues throughout the country Chris MacDonald lovingly shares the magic and music of the “King of Rock-n-Roll” with his full production tribute. Chris’s show is not an overdone impersonation. It is a natural heartfelt tribute to a legendary performer and music icon. With his rockin live band, Chris MacDonald draws his audience in with the look, sounds, and nuances that made Elvis the King. Adding to the authenticity of his tribute, Chris has the honor of being the only tribute artist hired by Elvis Presley Enterprises to perform at Graceland’s Heartbreak Hotel.

An energetic and experienced entertainer, MacDonald has also starred in the famous LEGENDS IN CONCERT stage productions and has performed in Branson, MO, and Las Vegas, NV. He has also performed in Concert with Elvis Presley’s original back up group The Jordanaires and D.J. Fontana Elvis original drummer “The Beat Behind The King”. Bring the whole family out to get “All Shook Up” and celebrate the life and music of the King of Rock-n-Roll.