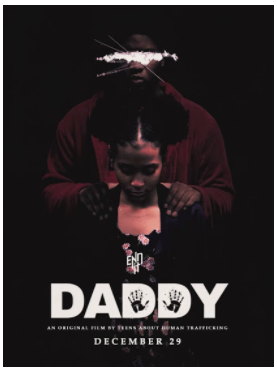 E.N.D. It , or “Everybody’s Not Doing It”, is a 501c3 youth nonprofit providing education, inspiration, and positive alternatives for teens using the Arts.  Our performing arts team uses its platform to bring awareness to issues affecting teens and the community.  “Daddy” was first written and performed as a stage play to sold-out audiences across the Treasure Coast and Broward County in Florida.  Now to reach a wider audience of parents and teens about the snares and pitfalls used by traffickers, “Daddy” has been converted to a screenplay.

Single father, Nelson, wakes up to his worst nightmare.  His daughter Adriana was preyed upon by some not-so-scary-looking monsters online, and snatched into the dark underworld of human trafficking.  After 14 days, the meaning of the word “Daddy” begins to blur for Adriana. Can she distinguish between the one who has her heart, and the one who hacked her mind?