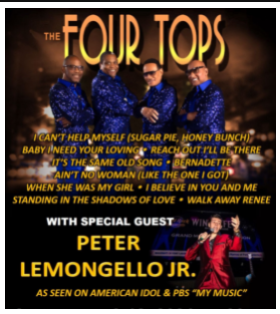 The Four Tops deliver an intimate evening of timeless hits that will have the entire audience dancing in their seats. A hit in concert, The Four Tops have toured incessantly over the decades, a towering testament to the enduring legacy of the Motown Sound they helped shape and define.

The Four Tops are inductees into the Rock & Roll Hall Of Fame, with 24 Top 40 Pop hits to their credit including “Baby I Need Your Loving.” Their songs, soulful and bittersweet, were across-the-board successes. “I Can’t Help Myself (Sugar Pie, Honey Bunch),” a No. 1 R&B and Pop smash in 1965, is one of Motown’s longest-running chart toppers; it was quickly followed by another longtime favorite, “It’s The Same Old Song” (No. 2 R&B/No. 5 Pop). Their commercial peak was highlighted by a romantic trilogy: the No. 1 “Reach Out I’ll Be There,” “Standing In The Shadows Of Love” (No. 2 R&B/No. 6 Pop) and “Bernadette” (No. 3 R&B/No. 4 Pop). Other Tops hits included “Ask The Lonely,” “Shake Me, Wake Me (When It’s Over),” “Something About You,” “Ain’t No Woman (Like The One I’ve Got),” “Still Waters Run Deep,” “When She Was My Girl” & “Walk Away Renee.”

The Four Tops bring a high energy show packed with the smooth moves, sweet harmonies, and powerful vocals that made them one of Motown’s most successful supergroups of all time.

Peter Lemongello Jr.
THE MOST VERSITILE SINGER, DANCER, PERFORMER TO EMERGE IN DECADES!

Peter Lemongello Jr. is garnering fans in staggering numbers since his recent National TV appearances on American Idol and the PBS “My Music” Series. Peter is a singer/entertainer, who has followed in the footsteps of his father (Peter Lemongello), the 1970’s singer who was the first person ever to sell over 1 million albums on television, but with his own style and personality.